Doing Disasters Differently – why me, why now? 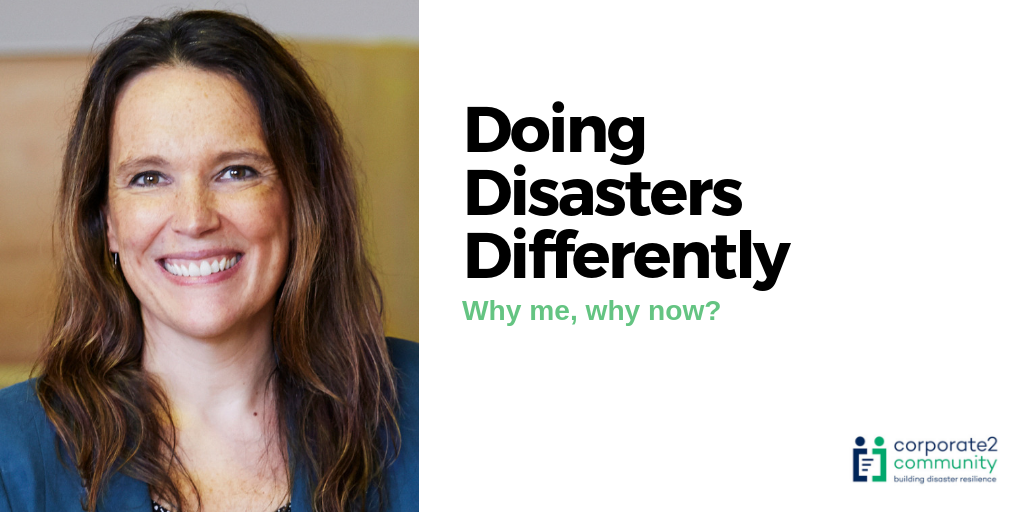 I often get asked why I’m so passionate about driving the private sector towards greater participation and contribution to building a disaster resilent Australia.

The answer has a few lenses.

Firstly, it’s my personal experience of disasters. While living overseas for a number of years, I was based in communities that experienced both natural and human induced disasters – and each one changed me a little.

While in LA I was camping at the epicenter of an earthquake that literally shook the ground. I must admit I was living the backpacker lifestyle so I didn’t necessarily feel the rumbles at the time but I did experience the community sentiments of coming together to support those who had.

A few years later while living in London, I was sent to New York for one night for a work trip to attend a film premiere (but that’s another story) and as it turned out, we were the last plane allowed to land on the East Coast of America on September 11. Our New York venture found us diverted to Boston where we had a five hour journey of landing, waiting on the tarmack, being individually walked off the plane with an armed military officer, interviewed by sobbing immigration officers, put on a bus and then taken to a hotel where for the first time, five hours later, we saw the images of the planes flying into the World Trade Centre. I was speechless.

For the next 10 days I had to stay in Boston and experience the whole of community vigils, the dropping to your knees when a truck drove past and hit tree branches, and the almost daily raids on the hotel where I was staying. The hijackers had reportedly stayed there before the attack, making the hotal a crime scene. The worst part – calling my mum back in Australia to let her know I was ok. I’m sure you can imagine what had been going through her mind for the five hours in between.

Then, and hopefully lastly, I was on two trains ahead of the one bombed in London. I remember arriving at the top of the Hammersmith Station escalators as my mum called me on my mobile asking where I was. “I’m fine, there’s an electrical glitch in the tube so they’re closing the gates and I’m about to get on a bus”. Unbeknown to me, my mum was watching not only a tube train but also a bus explode on her TV back in Australia. So again, I found myself amongst a community of strangers coming together for days and weeks following.

Secondly it’s my understanding that businesses want to help and have capabilities that can do just that. A few years after arriving back in Australia I had a dream job at a national corporate. I was responsible for developing a national community grants program and I led the community response to disasters.

This is when my passion for communities met my understanding of corporate goodwill.

Creating one of the biggest grants programs in Australia was an amazing achievement, yet I was saddened that we were unable to help every community who applied for funding – to make them more resilient to the future, or better support their journey through the recovery from the last disaster impact.

We received requests for more chain saws, community plans and, the one that sticks with me the most, a chalk board sign to inform community members that it was too dangerous to leave town on the recently flooded road. While we did manage to help a lot of communities it always stuck with me that there was so much more that could be done.

While at this organisation across two summer periods, there were fires in four states, storms and the flooding in Brisbane. There were so many communities needing help. With my responsibility to determine what role our organisation should play while supporting each event, across various states with differing government structures, it became clear to me that the typical way of helping communities was merely a drop in the ocean.

Corporate organisations have capabilities they don’t even know about when it comes to disaster resilience, response and recovery. And many of these capabilities drive innovation, which can empower community resilience with a change in mindset as opposed to a million dollar investment.

It was when this penny dropped that I got excited and the concept of corporate2community started forming in my head.

Thirdly – when I became a small business myself and began consulting in the emergency management sector as a stakeholder engagement expert, I started looking at the “business” stakeholder group differently.

For a number of months I would walk through the doors of Emergency Management Victoria and see the vision “Building safer and more resilient communities – working in conjunction with Communities, Government, Agencies and Business”.

There it was right in front of me. Business. So I spent two years reasearching who was doing what in Australia and overseas when it came to the private sector. I idenfified that there are (at least) three levels to the business conversation – vital critical infrastructure, non-vital corporates and small to medium enterprises based in our local communities.

All are important. And all have the opportunity to play a greater role in the space of building local, state-wide and national resilience – but they need leaders to show them the way.

And lastly, it’s because we need to thrive, not just surive, the future impacts to come. The unfortunate reality is that our future will be one with more frequent, more destructive and more unpredictable natural and human-induced disasters than we’ve ever experienced before.

We’re already seeing it around our country with Queensland being impacted by drought, storms, cyclones and floods all within a matter of months. How do businesses and communities survive not one, two, three but up to four compounding disaster impacts when we are only planning for the last disaster?

It’s time to accept we have a shared responsiblility to build resilience and start planning, trusting and working better together. If we are strong in the good times, we will thrive in the bad. In the process of planning, exciting opportunities await.

This is just the beginning of my journey to drive others across government, business and communities to start ‘doing disasters differently.’

Now you understand the why of my corporate2community venture. I’m so excited at the future focus of what and how. I look forward to welcoming you on my journey.